- Diabetes mellitus is a chronic metabolic disorder that results in hyperglycemia (blood glucose level >126 mg/dl) and is due to a lack of insulin and / or deficiency in its action.

Insulin is a hormone secreted by the pancreas and helps in glucose utilization for energy metabolism.

There are different types of diabetes: Type I Diabetes in children, Type II Diabetes in adults, Gestational Diabetes in pregnancy and other rare types...

Type I Diabetes is a chronic disease due to severe deficiency in insulin secretion and usually affects the young population.

It is treated by subcutaneous administration of insulin (by injection, pump therapy or continuous subcutaneous insulin infusion), along with blood glucose self monitoring, diet and exercise.

The acute complications of Type I Diabetes include:

- Diabetes prevalence is increasing worldwide according to WHO and International Diabetes Federation estimates.

-Diabetes pathophysiology: Type I Diabetes implicates a genetic predisposition but not a hereditary transmission. It is an autoimmune disease, due to destruction of pancreatic beta cells, triggered by an environmental factor .The Type II Diabetes is a familial disease due to a combination of insulin resistance and relative insulin deficiency. It may be delayed or prevented by sustained life style modifications.

The primary goal of the Chronic Care Center since 1994 was to provide comprehensive care for children with Type I Diabetes, also known as Insulin Dependent Diabetes.

Diabetic patients visit the Center every 1 to 3 months, to evaluate and follow-up on treatment protocol, glucose monitoring, self management skills, dietary behavior/nutritional information and growth status.

Due to the quality of medical services offered by the Center, the nutritional and the psychosocial follow ups, our children have grown in a stimulating and friendly atmosphere, sharing their concerns and experiences with their peers during their regular medical visits.

The number of young Diabetics registered at the Chronic Care Center reached 2779 on November 2019. They are referred by pediatricians and / or endocrinologists from all Lebanese regions and include different age groups. The majority of patients are between 10 and 20 years (cf. age distribution chart).
In the last few years, we have noticed a significant increase in the number of new cases (around 180 / year). 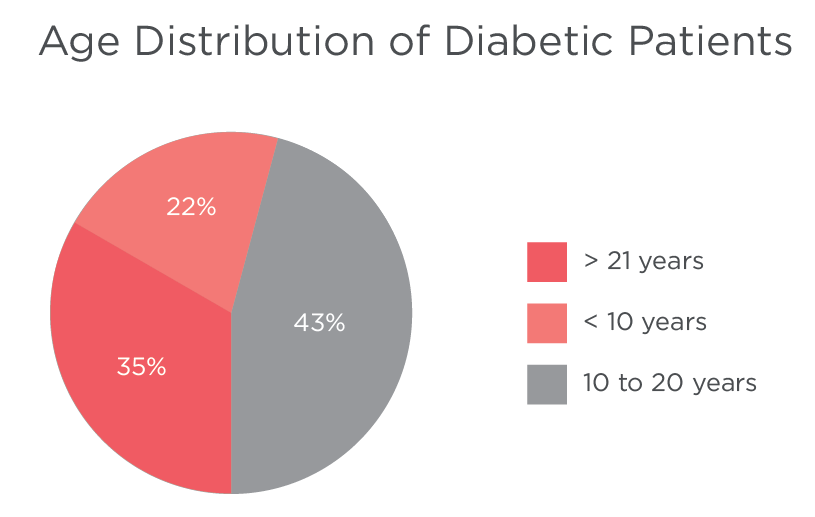 Despite the financial and social constraints, the Chronic Care Center keeps the doors open to patients less than 21 years and newly diagnosed Type I Diabetic children.

> View our services in detail, go to patients flow chart